Seeing: the Key to Writing 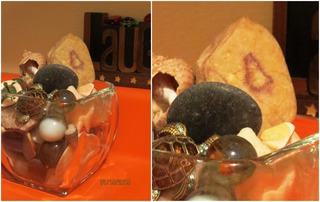 The Westie rock in a jar of other little items. A red outline of a sitting West Highland White Terrier on a yellow limestone rock.
.
“Look what I found for you!” my friend said, handing me a chunk of sandstone. “A rock like your dogs!”

I looked at her smiling, eager face, and then at the rock, trying to sputter a response. The chunk of tan sandstone filled my hand, but it looked nondescript to me, a big chunk of driveway gravel. Originally oval, it had flat faces where it had been broken. A reddish stripe ran up one side, and there was an odd blotchy red line on the side.

She pointed at the mark.

“See?” she said. “I thought of your dogs as soon as I saw it: he’s sitting back and howling.”

I could picture one of our white Westies sitting on his haunches, nose pointed to the air, his white carrot tail lying flat on the ground behind him.

And there he was on the rock. In the side view, I could see one closed eye and the ear lying flat against his head, even the line of his mouth. Was he howling? Or gazing up in expectation of a tasty treat?

“Oh!” Finally I could say something. “I do see it!” I’m sure I still sounded doubtful.

“I was taking a walk on the hillside,” she said, “and glanced down and there it was. It’s yours,” she said, and I tucked it into my bag to take home and we went on with our talk and preparations for the dinner she was serving.

When I got the rock home, I put it into a glass jar on a bathroom counter, beside a green jade disc she’d found on a California beach and given me on another occasion. This is a woman who appreciates rocks, and knows I do too. I treasure her insights and the growing friendship between us.

But I’m not sure she realized, any more than I did at that moment, what this particular rock signified.

Each morning, I look at the red outline of the dog, his head thrown back, and I smile. Somehow that little figure embodies the Westies’ stalwart natures, and their cheery steadfast solidity.

I kept picturing the hillside where my friend and her husband have made their home. Typical of the Black Hills foothills, it’s rocky, grassy, studded with pine trees. Naturally, their construction carved new shapes as they created a basement, driveway, and space for adjacent buildings. I suspect this stone was always resident on the hill.

As I walked with her to an outbuilding later that day, I noticed many similar stones scattered through the grass, observed them the way you do when you don’t want to trip, only as obstructions. We walked and talked, enjoying the air, but more intent on our conversation than on our surroundings.

As a writer, I pay attention to my surroundings. I pride myself, apparently too much, on my ability to recall and describe what I see. Yet I can describe that walk and those stones only in very general terms. I might have stepped over a dozen stones with figures outlined on them that day, and not known it.

At home, I measured the figure of the dog on the stone: it’s three-quarters of an inch high.

She was walking on her hillside, perhaps getting out of her home office for a few minutes to relax. Her profession requires her to listen sympathetically every day to people talking about their problems, so she may have been considering a specific issue. I imagine her striding along, breathing deeply of the fresh air, straightening her back, clearing her head-- just as I walk on my hillside. Thinking.

Somehow, she looked down and in an instant saw that figure and thought of my dogs.

How do our brains make connections? All I know is that odd conjunctions happen. A scent can trigger an ocean of images; a sight can remind the viewer of anything that may reside in her tangled brain. Thinking of what has triggered poems, I could name a dozen unlikely sparks. From these inexplicable linkages come art, poetry, music, and a dozen other disciplines that engage our brains.

But in order to catch the poetry, the art, the beauty, we have to see. If we stumble blindly up the hill concentrating on not tripping, or trapped inside our minds with anger at what the day has done to us, we may miss the clue.

One of my axioms in writing has been Norman Maclean’s statement from A River Runs Through It:

Seeing. That’s the key to writing, and I believe it is also the key to living consciously, to getting as much from your life as you can: seeing every day, as much as you can, in as much detail as you can.

The more you see, the more likely you are to see something you weren't noticing, which makes you see something that isn't visible-- but that invisible image may hold the key for which you have been searching.

So every day, when I look at that little red dog on that piece of sandstone, I remind myself to see. And I thank her for seeing.

I've looked for images in the clouds, but never in the rocks. Although I've been to Bryce Canyon and there if you don't see faces in the hoodoos there's something wrong with you! What a great reminder to be aware.

Not only faces in the hoodoos there, Susan, but galloping ogres, headless horsepersons and the like!