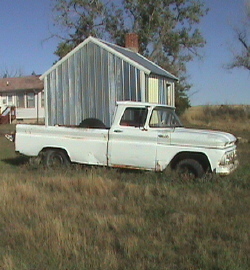 1962 Chevy Pickup.
Linda's own piece of "vehicular history" before it was sold to the local antique auto dealer.
. . .
Note: I used to jot notes on a clipboard with numbered pages on the seat beside me so I could write without looking and then yank each one off when it was finished and put them in order later. Now, with all the publicity about the dangers of texting and driving, I wait until I've pulled over for some reason and write. And I made some of these notes while Jerry was driving.

In many rural areas, you can trace each family’s vehicular history from the cars scattered around the farmstead: the 1930s autos, the 1940s, 50s and so on. In some cases you can see the original homestead of log, followed by a stick-built house and then the first, second, and third generation of trailer homes-- and all appear to be occupied. Idaho residents don’t seem to be much interested in zoning. Stunted or miniature ponies and goats graze among the old cars in the back yards. Behind one house is a steep bluff leading down to a creek, covered in orange. Peering closely, I realize the orange covering is thousands of miles of tangled baling twine.

Yet in the front yards of many rural homes-- many of which are trailers-- are bushes that have been trimmed into fantastic shapes: animals, geometric forms. Some trees have been obviously clipped into perfect tree form: the perfect A shape, for example.

This area reminds me of our drive up the Mississippi to Baton Rouge on the back roads: it’s a working landscape, and would not be considered beautiful by the arbiters of “scenic,” and yet it produces food, which should be beautiful to us.

And it makes economic sense to have feedlots-- “confinement facilities”-- for pigs, chickens, and cattle here because they are eating the byproducts of the sugar beet production. But it ain’t pretty. “Andersonville for cows,” says Jerry. And of course it’s no more the nature of cows to stand in filth than it was for the Union prisoners; they are drugged by their misery.

Lots of American flags. Almost all the business buildings used to be something else.

Huge piles of sugar beets outside towns, and trucks go by hauling them. We see quite a few along the road. Finally we picked one up and took a picture.

Jerry’s expertise for the Wyoming highway department was bridge construction; his travelogue contains remarks like, “That bridge is just exactly like the one that failed over Lake Ponchartrain.”

Why does “scenic” mean “no buildings indicating labor takes place on this land are in sight”? We definitely do not associate human habitation with scenic-- which may be one reason working people don’t identify very well with environmental concerns.

Lots of just junk lying along the highway-- bedsprings, pieces of cars, the usual trash-- as if people have been tossing it out their car windows for 60 years. Are these people too busy to clean up these messes? Or do they simply not care how ugly their surroundings are? Or not see it?

Along the highway are the standard signs declaring this stretch of highway cleaned up by several religious groups: a Mennonite youth group, and young men and women of a particular Latter Day Saints Ward. Trying to set a good example?

The tidiest places are the huge farms, with several houses, each bigger and higher up the hill than the last, many barns and long metal sheds big enough for 18-wheelers. Lots of irrigation pipe along roads and in fields. I think people who are working hard keep things tidy because it’s easier to get your work done if you know where your tools and equipment are.