The Perils of Punctuation, or How I Became a Stickler 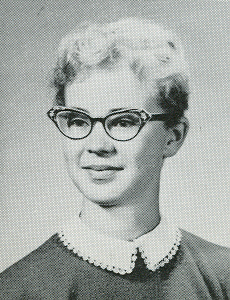 Linda Hasselstrom's Senior Class photo in the 1961 Pine Cone of Rapid City High School.
. . .
A few weeks ago, I received a telephone call from Becca Curry, the niece of my favorite high school English teacher, Josephine Zamow. Going through her aunt’s possessions, Becca had found a folder containing papers I’d written for Miss Zamow’s class. Would I like to have it?

That worn folder has kept me reading, and laughing, and blushing, and remembering Miss Zamow, for days. I’m deeply grateful to her, and to Becca, for reminding me that, like most of us, I wasn’t as smart in those days as I thought I was. I have trouble even looking at my photo, because I look so young and at the same time so smug. Like my peers, I was caught in the horrid high school business of trying to be gorgeous, trying to fit in with the crowd. I believe Jo Zamow was one of the people who taught me, by example, what a waste of time that is.

I remember Miss Zamow as a little dynamo with soft brown hair cropped at chin length, and bangs that curled down on her forehead. She wore tidy little suits, brightened perhaps with a scarf under the collar. I remember her jaw as usually being fairly rigid, probably from what she had to put up with from her classes. She had a wry sense of humor, and I always had the sense that she wanted to say more than was acceptable in a high school classroom. I hope I told her how much she meant to me, and probably I did not.

Years later, after I’d begun to be published, I visited her class. She pulled from a deep desk drawer my lengthy treatise on Why I Am A Christian and read parts of it to the class while I blushed furiously. I was hoping to find that paper in this collection, but it’s probably just as well it’s not here. As I recall, it was written while I was angling for the attentions of a handsome blond fellow who was determined to become a missionary. And I heard in Miss Zamow’s voice, when she read it aloud, her awareness of its pompous tone and its ironies. (See “Confessions of a Born-Again Pagan” in my book Land Circle.)

The papers Becca gave me were written for Advanced Placement English, dated from late 1960 into 1961. Here I found three poems that deserve to be forgotten, but they are among the earliest work of mine I’ve saved. I’ll show them to my retreat writers to prove that everyone CAN improve.

One poem, “The Alamo,” is filled with patriotic spirit– and contains one of the errors I’ve now become a stickler about: the confusion of its and it’s. Here’s the handout I use when I encounter that error these days:

*~*~*
The confusion of the possessive “its” (no apostrophe) with the contractive “it’s” (with apostrophe) is an unequivocal signal of illiteracy and sets off a simple Pavlovian “kill” response in the average stickler. The rule is: the word “it’s” (with apostrophe) stands for “it is” or “it has”. If the word does not stand for “it is” or “it has” then what you require is “its”. This is extremely easy to grasp. Getting your itses mixed up is the greatest solecism in the world of punctuation. No matter that you have a PhD and have read all of Henry James twice. If you still persist in writing, “Good food at it’s best”, you deserve to be struck by lightning, hacked up on the spot and buried in an unmarked grave.
-- Lynne Truss, Eats Shoots & Leaves, p. 44
*~*~*

Miss Zamow would have loved that.

The papers provide an insight into what we were reading and discussing for the class. For the third six-weeks test, for example, I wrote on conformity vs. nonconformity, and forecast some of my own future by voting solidly against conformity, quoting T.S. Eliot’s “Hollow Men” in defense of my view. In February, 1961, I wrote passionately in defense of the beauty of the prairie that some saw as “dull and uninteresting,” describing some of the encounters I had there with coyotes, antelope and eagles while riding my horse. However I also described Jackson Hole as the “ideal vacation paradise.” Both Jackson Hole and I have changed!

Another topic was training a young horse, and how one must patiently show him that “his diet includes only hay, oats and water,” and not human flesh. I vividly remember the inspiration for this one; my colt Oliver started biting my arm and left giant blue teeth marks on my buttocks before we convinced him that was a bad idea. Once you get on the horse, I said, his first act would be to “leap four feet into the air, come down hard, and start spinning like a runaway top. He is just high-spirited, as some parents say about their demon children.” I still feel pretty much the same way about horses and spoiled brats.

Another favorite topic of mine that semester was the behavior of teachers; three essays on the subject extol the virtues of strict teachers. Miss Zamow must have been proud of me; she certainly was not one of the lenient ones I criticized.

Much of our writing that semester centered around reading. I still recall lines from Percy Bysshe Shelley’s poems “Ozymandias,” “To a Skylark,” and Ode to the West Wind,” and wonder if they are still read in high school English. I asserted in a September paper that Shakespeare’s Sonnet 116 should be required reading for all high school students. I thought John Milton’s “L’Allegro” and “Il Penseroso” were “escapes from reality,” but well-written. I didn’t care for William Blake’s work then, and have not changed my opinion. After writing papers analyzing the writing of Andreyev, Gorky, Tolstoy and Dostoevsky, I have avoided all four writers ever since. But I had a great time comparing our new car with our old car, saying the 1950 Chevrolet “closely resembled a duck,” while the 1959 was more like a “crouching panther.”

Asked to write about one poem, I insisted that I couldn’t choose between them and wrote about two, Walter de la Mare’s “The Listeners,” which I can still recite, and “The Stab” by William Wallace Harney, which I had entirely forgotten-- though I can see the influence of both poems in my writing today.

On Dec. 9, 1960, I turned in a diamond paragraph designed to teach us the use of various kinds of sentence structure; I’m going to use this as an example to the writers who come to Homestead House. We were instructed to write the following sentences:

Here’s what I wrote:

My mirror is my bulletin board. I wedge postcards around it, and I stick poems and reminders to the frame. Since I collect these items fanatically, I now see myself only in the center of the mirror. After tiring of peering at two inches of my face, I may tour the world in thoughts, or I may read poetry and philosophy. If I am discouraged, some selection will make me cheerful. I can read love poems and prayers, or I may look at friends’ faces and tour exciting places. Truly, my bedroom mirror is an adventure in itself.

But the best gift from this collection of papers came from the comments Miss Zamow wrote on two papers.

At the top of the paper on Maxim Gorky’s “In the Steppes,” dated Jan. 19, 1961, is an A-, followed by this comment in Miss Zamow’s small, square handwriting: “Excellent except for punctuation. Please analyze each use of the comma in this paper.”

The second paper, on Leonid Andreyev’s “The Seven Who Were Hanged,” dated Jan. 20, 1961, received an A, and this comment, “Anyone who can analyze this astutely, write this well, and produce a term paper for a daily assignment is intelligent enough to learn how to use punctuation. Please do so.”

I doubt that I sat right down and studied punctuation during that senior year of high school, but I’ve worked at punctuating correctly ever since. I’m delighted at this reminder of just why I’m so darn picky, and I hope Jo Zamow would be proud of me.