The Diversity of the South Dakota Grasslands 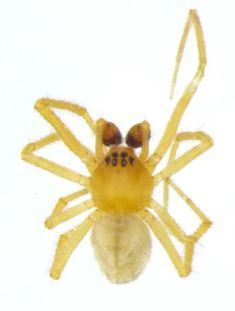 A male Theridion pierre spider found on the Fort Pierre National Grassland. The tiny spider was discovered by L. Brian Patrick, an arachnologist from Dakota Wesleyan University in Mitchell, SD. [photo courtesy L. Brian Patrick]
. . .
Recently I read that an arachnologist from one of South Dakota’s small universities, Dakota Wesleyan in Mitchell, discovered a new species of spider on the Fort Pierre National Grassland. Named for the grassland, the Theridion pierre spider is one of more than 500 species confirmed and announced in a six-month span.

Experts believe only 10 percent of spider species, and in fact all animals on earth, have been documented by humans so far, says the discoverer, Brian Patrick. He thinks he may identify as many as five new species from the spiders he has already trapped in the area.

Patrick has also found spiders in his traps whose find in South Dakota is the farthest west, east or north they've ever been documented. That's because few scientists are working on the sparsely-populated northern Great Plains, says Patrick, who is probably the only arachnologist working in the state. "It's not very sexy to work in South Dakota," he said. Big grants are usually given to study new species in places such as the rain forests of Borneo.

"I'm poor; I have to work in my backyard. Turns out my backyard is pretty fertile," he said. He added that "another common misconception about the prairie is that it's a two-dimensional environment, unlike rivers or forests where completely different creatures can live at different depths and heights." The researcher said in talking with colleagues, he's learned that, "I always have more diversity in my grasslands than they do in their forests."

I'm so delighted to see this story for several reasons. First, the local newspaper gave it prominent placement; I can't help think the management is reminding readers that they should not be so hasty to encourage "developments" that include mining and paving the prairie. Second, this is more confirmation for the fact that we haven't begun to discover what rich knowledge the prairie might still conceal.

See the article in the Rapid City Journal.

See the article in the Capital Journal, Pierre SD.

See the article in the Sioux City Journal.

Thanks for this, Linda. I'm delighted to hear that Brian Patrick is continuing to do wonderful things. He was the student audio-visual helper at the session I hosted at the Ecological Society of America meeting in 2003. I stayed in touch with him for a few years, then lost track of him. Thanks for reconnecting me with an excellent scientist and a lovely person.

"Mitakuye oyasin" say the Lakota; we are all connected. And once in awhile the circle comes around and we re-connect. Thank you so much for letting me know, Cindy!