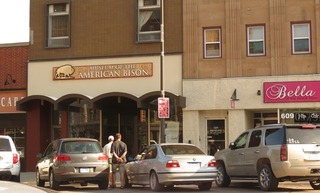 The museum is in downtown Rapid City.
Park and walk to see street art and many locally-owned businesses.
. . .
I've finally visited the Museum of the American Bison at 607 St. Joseph Street in Rapid City. I urge you to do the same, perhaps while on a walking tour of the rejuvenated downtown area.

Even if you know a lot about bison, you can learn from this museum! Dedicated to the story of the survival of the American bison, it’s filled with information, all presented in a manner accessible to adults and children alike.

Stare Bruno, a full-grown, beautifully mounted bison in the eye. Watch an interactive video describing how the tribes used every part of the buffalo. See historic photos of early hunts, or those who hitched bison to wagons, of hunters and sharpshooters.

Kids can unearth bison bones in the huge bison dig box. Or they can visit the “tracks and scat” table for down-to-earth information about wildlife. The shop stocks locally made souvenirs, tastefully decorative and useful items, as well as vintage jewelry including buffalo nickel necklaces. A rotating art gallery features stunning work from local artists.

The museum shows the story of the bison from its prehistoric beginnings through its near extinction to the eventual resurgence of the animals in the 20th century, certainly one of the most captivating stories in the history of the American West-- and often neglected for human history. Operators promise to constantly update exhibits, include rotating exhibits and guest lecturers, so I plan to go back often.

My favorite part of the museum is the display devoted to the people responsible for saving the American bison when the hide hunters and even the government was determined to eliminate them. As usual, the men got the credit, but all of them had wives who were deeply interested in saving the bison. Frederic Dupris, a French Canadian who moved to South Dakota and married Mary Good Elk Woman, a Minneconjou, saved five bison calves which founded his herd. Later, Scotty Phillip, also married to a Lakota woman, continued Dupris’s work of keeping the bison herd pure and strong; when he died, he had more than a thousand head.

After years of encouraging shoppers to throng malls and vast parking lots on the outskirts, Rapid City has finally figured out the benefits of a lively downtown, not only for tourists but for citizens. This delightful museum is only one of dozens of shops close together downtown, so that you can walk from one fascination to another. Park and stroll.

The Museum is a nonprofit organization, the dream of its proprietor, relying on donations, grants and admission receipts, so enjoy your visit and then donate generously.

Bison: Monarch of the Plains, for which I wrote text to illustrate photos by David Fitzgerald (published by Graphic Arts), is still available, usually at a reduced cost, through various online outlets. Because the book was primarily photographic, much of my text was cut, but there’s still good information-- and terrific photos.
See my website page about the book by clicking here.