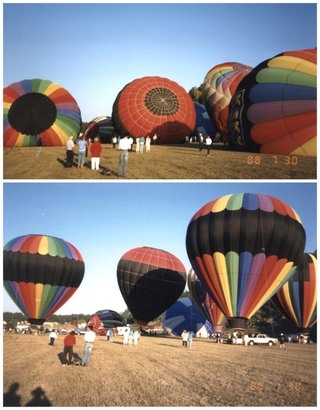 The Balloon Races in Custer, SD.
Taken in 1988.
. . .
Early in January, 2012, I attended a talk on the early balloon ascensions from the StratoBowl near Rapid City by Arley Fadness of Custer, who worked on balloon design with famous aeronaut Ed Yost. The ascension of 1935 was the beginning of the space age, but earlier experiments with balloons of various types had occurred all over the world.

I was surprised to learn that George Armstrong Custer, later a General, was involved in surveillance ballooning during the Civil War. The flamboyant Custer was said at the time to dress “like a circus performer gone mad.” His nickname was “Cinnamon” because he slicked back his long hair with a cinnamon-scented pomade. Assigned to balloon surveillance, he reportedly insisted on being accompanied by an experienced aeronaut and sat in the bottom of the gondola. Fadnes didn’t explain how he was able to spy out enemy movements from that position.

Custer’s connection with ballooning surprised and delighted me because a few years ago I wrote a poem about attending the balloon races in Custer, SD-- named for the General. When General Custer insisted on becoming part of the poem, I wasn’t especially happy but I did allow him to march onstage. The poem ended with evidence of my dislike of the General and his treatment of the Indians in the West. Now that I know more of the history of Custer’s experience with balloons, my poetic speculations about what Custer might have done with balloons in Western warfare seem less far fetched.


At the Balloon Races in Custer, South Dakota

Coffee steams as balloonists talk
to ranchers; breath explodes in still air;
three women in shorts jostle in a patch of sunlight.
Seven baskets lie beside seven fans,
chill air swells silk pockets bigger than the bank,
the blue and white one looms over the courthouse,
twice as high as the sheriff's office.

Custer nods, waves, smiles to see
they sent balloons to meet him;
his worth is recognized; now
he can send the gold dispatches,
begin wresting this land
from the savages
who don't appreciate him either.

This poem appears in Land Circle, published 1991 by Fulcrum Publishing.

your poem evokes so much for me. My love for so many stories of the west that often are overlooked in accounts of history. The mention of Custer and his experience during the Civil War in ballooning so cool to read about. thanks for sharing.

I always like the picture of Custer, Bloody Knife, Colonel Ludlow, Cpl. Noonan in the background and a dead bear in the foreground. Custer seems embarassed as it was mostly Ludlow who did and could do the shooting. Noonan would later shoot himself behind the theater in Ft. Lincoln after his "wife" was discovered to be a man. (Mrs. Nash) The rest in the picture ended up enjoying the hospitality of the natives at Little Big Horn. The bear, we presume, was another waste of wildlife with only certain parts going for decoration.