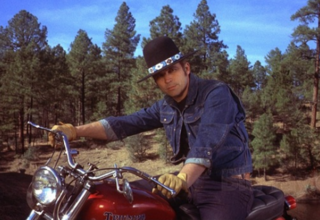 Tom Laughlin in his "Billy Jack" attire.
The photo is from the internet; I don't believe I have any photos of him in my personal collections.
. . .
I note with sorrow the death of Tom Laughlin, the star and producer of the "Billy Jack" movies.

While Laughlin was a student at the University of South Dakota in Vermillion (where I also attended college) he met his wife Delores Taylor. He said he wrote the original screenplay for the first "Billy Jack" film after visiting her hometown of Winner, South Dakota, and observing the prejudice against Native Americans there.

Laughlin wasn't only an actor and activist; with his wife he founded what became the largest Montessori school in the U.S., in Santa Monica, California. He left acting to devote all his attention to the school, which went bankrupt in 1965.

In another lifetime, one of my many past lives, Tom Laughlin read some of my writing, and invited me to meet with him and with his wife Delores Taylor in Minneapolis. There he hired me to write the screenplay for a movie he wanted to do about Crazy Horse, the charismatic Lakota leader who also caught the imagination of sculptor Korczak Ziolkowski.

I don't recall the exact dates and don't care to delve into my journals for the details, but I do recall that I was working on the screenplay during the Rapid City flood of 1972. After proofreading the first published issue of my arts magazine Sunday Clothes, I had left Rapid City early that afternoon in my VW van. Because the storm was so severe, I pulled over not far outside town and sat on the floor in the back of the van while the storm winds made it rock and roll, recalling that Crazy Horse, who was born along Rapid Creek, had once predicted a devastating flood there.

The next morning, I heard about the Rapid City flood, which killed hundreds-- and incidentally washed away the company that had printed the first issue of my magazine.

The Crazy Horse movie was never made, of course. And despite all the research I did on Crazy Horse, including some that I believe has not yet been duplicated, I have never turned the screenplay into a book.

But I appreciated the dreamer, Tom Laughlin, who had the thought, and the strength of his opinions and his devotion to them.


back to top
Read More
Be the first to comment 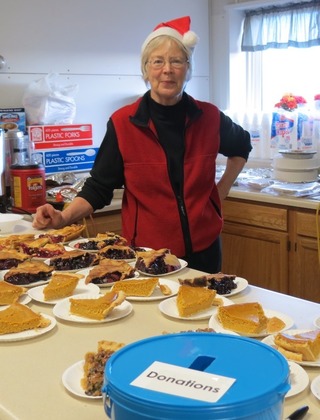 Linda serving at the HAHA Winter Carnival in 2012.
There is some debate over whether she is a "kitchen witch" or a "dessert elf."
. . .
In one of my many former lives, I lived and worked in Columbia, Missouri, where I was a graduate instructor in English and a grader for an English professor at the University of Missouri from 1969-1971, while working on my MA degree in English there.

I recall clearly my first sight of the woman who became my friend Kathy. Sometime during those years, I had probably trotted past the quadrangle full of war protesters on my way to the next class on my teaching schedule, freshman composition. I may have been wearing my favorite leather miniskirt, which I wish I’d kept just so I could be shocked today at what I once wore out in public.

As I took roll, I became aware that the class was almost entirely young men, their fresh and pimply faces upturned with various teenage looks of disdain or eagerness. But in the corner of the back row as far as possible from all of them sat a young woman with long black hair and an expression of loathing-- whether for the boys, for me, or for the class, I wasn't sure.

I don’t recall the details of the class that day, but as the others filed out, I asked her to stay and tell me who she was and what she was doing in my class. As I’d guessed, she was a senior, an art major who had left the dreaded freshman comp class until her last semester, hoping she could wiggle out of it. But the University had decreed she had to take it.

I couldn't absolve her. I asked her what she was reading.

I had no knowledge of Goethe, but we worked out a plan whereby she would write a comprehensive paper on Goethe's writings, presenting it to me several weeks before the class was scheduled to be finished. I didn't want her to neglect the paper in the rush to graduate, but I also was protecting myself; if she failed to deliver, I'd have time to devise an alternate plan.

The next morning I rode my bicycle to work as usual, locking the frame to one of the racks outside the English building and hauling the front tire up the steps with me. I threaded my way among the glass-walled cubicles of my fellow slaves-- I mean graduate instructors-- and thumped my books down on my desk. As I tucked the tire behind my desk, I realized there was a shiny package on my chair: a loaf of bread wrapped in tin foil.

On the outside of the package was a note from Kathy, explaining that she had been in St. Louis recently, and been handed a recipe for Pumpkin Bread by a hippie who told her that receiving the recipe required her to give it away-- with love-- to anyone who asked.

The bread was delicious.

I learned that Kathy lived only a few blocks from me and we became close friends for the rest of the time I lived in Missouri. She graduated in fine style and eventually moved to Montana; we remain friends.

So now I've been baking the pumpkin bread and giving it away for at least 43 years, always with the recipe and the reminder to give it away-- with love.

This week I baked loaves of the bread to donate to the Hermosa Arts and History Association’s fundraising Winter Carnival on December 8. Inside each one, I tucked the recipe, with love.

Besides my pumpkin bread, I’m taking pumpkin cake and rhubarb dreams for dessert, and a roaster full of posole. I’m told that other volunteers will bring soups including cheese, beef barley, potato knefla, chicken noodle, cheese tomato, and gluten free chicken and rice.

You're invited to the second annual Winter Carnival, which is being held to raise funds to continue with our project to turn our building, erected in 1896, into a community gathering spot and museum. As usual, we will be serving soup and desserts created by HAHA members, and offering a huge assortment of tasty things baked by volunteers, as well as providing games and entertainment for children and photographs with Santa Claus.

Grease pan(s) well. Bake 350 degrees F. for 1 hour and 15 minutes or so, until top springs back when you poke it lightly with one finger. Cool before removing from pan.

WATER: If you use canned pumpkin, or frozen yellow squash you won't need the water, and no one will know it's not pumpkin. I've also used dried pumpkin and dried winter squash for this; just soak it in milk or water overnight in the refrigerator, and add the milk with the pumpkin or squash.

For more information: See the HAHA website at www.HermosaHistory.org

Wish I could be there. Food sounds lovely. How about a pumpkin bread recipe?

It is funny how we connect with others. Thanks for sharing.

Soups and baked goods were great, if I do say so myself. I've added the pumpkin bread recipe to the blog now. Enjoy!