Never Discard a Written Draft, or Finding Metaphor in Harvest 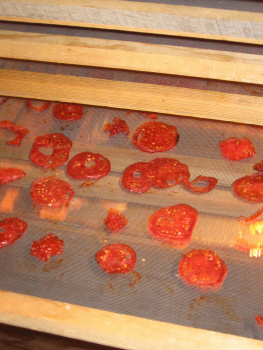 Tomatoes on the food dryer.
. . .
Several people have just written emails to tell me that this morning, September 29, Garrison Keillor read an old poem of mine, “Clara: In the Post Office,” on Writer’s Almanac. I got to hear him the first time he read the poem, not long after my book of poems Roadkill was published; I believe this may be the third time he’s read it, so it’s good to know he likes it. I’m sorry that the “buy now” link on his website leads only to Amazon.com, but at least readers will see the titles of many of my books. And I was inspired this time to send him a copy of a newer book of poetry, Bitter Creek Junction, hoping that he might like something a bit more recent.

All this fits in with what I was thinking this morning about the value of saving drafts of everything you write. While Keillor was reading an old poem of mine that still inspires him, I was crumbling some oregano I dried in 2007, putting it into a jar to put in my kitchen spice rack. The oregano smells strong and fresh, much better than anything I might purchase-- and probably was harvested more recently.

In the spring of 2008, we moved back to the ranch, so my oregano was newly started. I harvested some in 2009, but not much, allowing the plants to grow and become more vigorous. Now they are not only strong in their first location, but I’ve moved them to an herb garden, so I should be able to harvest a lot next year-- but I still have a jar or two of the 2007 left, so I won’t have to buy any.

I planned ahead for this hiatus of herb harvest: my herbs in Cheyenne were vigorous, and I knew we were moving, so I spent a lot of the fall of 2007 cutting stems and hanging the plants from the curtain rods in my sewing room in the old house, where they received considerable heat during the long fall days. I planned ahead, and am reaping the rewards.

Writing doesn’t always allow me to plan ahead, but it has taught me to save, so I can see a metaphor here. My journal goes with me everywhere, and I am constantly taking notes. I don’t always know what those notes will become in my writing. Maybe they will be nothing, just notes taken about something I was doing or thinking. But sometimes, I find that a thought leads me back to notes taken on a particular day, and I draw details out that become a poem, or a paragraph in an essay.

In the same way, I dried that oregano in 2007 not knowing what it would become, but knowing I’d use it. This morning I added some to tomato sauce I am making from some tomatoes that have been ripening in the basement since I thought we were going to have a frost a week or so ago. (Meanwhile, on the plants, more tomatoes are ripening; the thermometer has dropped to 38 degrees, but no lower.) The food dryer was built by my husband George using plans purchased from Living Foods Dehydrators (he built the food dryer long before they had their DryIt.com website!). Made of plywood and plastic screen suitable for food preparation, it is heated by 4 lightbulbs wired so they can be switched on individually to adjust the heat.

Today I’m also drying zucchini; a friend gave me more than we can use fresh. I sliced them evenly, arranged them on several wire trays in the dryer, and switched on all 4 light bulbs. The temperature outside is a cool 62 degrees, so I moved the sliding top of the dryer almost closed, and keep checking the thermometer on the top shelf. I like to keep the temperature between 90 and 110 degrees for most-efficient drying. The dried chips will be great for winter snacking, or I can add them to soups and stews.

Besides making several gallons of tomato sauce, I’ve dried pounds and pounds of tomatoes, though they are a little trickier than many vegetables because of their high moisture content. I slice them as thin as I can, laying the slices on an old oven grill over a bowl in the sink, so some juice drips out of the slices. I catch the juice in a bowl and drink it or use it in soup.

Then I spray the screened trays with oil, or lay sheets of Teflon paper (available from Living Foods Dehydrators) on the trays, alternating sides to improve air circulation. I’ve found that the tomatoes don’t darken if I don’t put them on the bottom two trays. I keep the temperature high for a day or two, sometimes three. Some folks season the tomatoes with spices or salt. (The book Dry It You’ll Like It, also available at DryIt.com, offers good information on drying practically anything.)

Our dry climate certainly helps the dehydration process, though since the food dryer is close to my washing machine, I usually avoid hanging wet clothes on the indoor clothesline while I’m using the food dryer. The finished slices taste intensely of tomato, and look like stained glass.

I’ll confess to not liking any incarnation of green tomatoes I’ve ever tried, and I do believe I’ve tried them all. Instead, I ripen tomatoes on the vine or in newspaper-lined boxes in the basement. When I find tomatoes too grasshopper-gnawed or damaged to use, I toss them into the compost. So not a tomato is wasted.

Similarly-- back to that metaphor I’m working on-- I often look into my poem draft binder and find a fragment of a poem that didn’t work. But because I haven’t thrown it away, I can look at it again. Sometimes my attitude has changed, or I’ve gotten more information; I can often resume work on an idea that may be years old, and nurture it into completion.

Although my book Roadkill is now out of print, "Clara" may be found in my book
Dakota Bones: The Collected Poems of Linda Hasselstrom

The Amazing Benefits of Grassfed Meat

“For years now,” Manning begins, “I have been fascinated by the permanence and healing power of grassland. If we respect the great original wisdom of the prairies, I’m convinced we can heal the wounds inflicted on the American landscape by industrial agriculture.” Manning explains that he first considered this possibility when a friend decided to raise bison, but soon realized it worked just as well [or better? Adds Linda] with cattle. Now there is diverse collection of people across the nation raising grassfed beef and dairy.

And, says Manning, “Powerful solutions self-replicate. Like viruses, they creep from one farm to the next, eventually exploding in exponential growth. They scale up.” And grassfed beef production, he believes, is poised to scale up.

Manning discusses The American Grassfed Association, a network of almost 400 graziers, with examples of how these families operate. He supports each of the points on the list above.

“We are slowly learning,” says Manning, “that human enterprises work best when they mimic nature’s diversity.” At first, he suggests, many organic farmers believed this meant vegetarianism. But organic farmers found out “the hard way” that they could not make their operations balance out-- either biologically or economically-- without animals, just as nature provided.