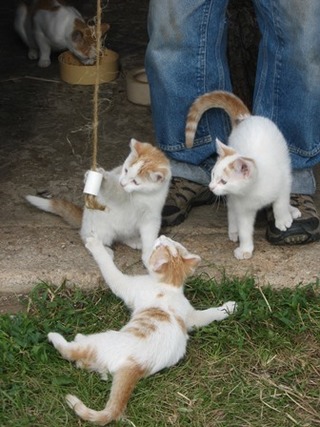 Three of the four kittens available for adoption.
Three kittens play with a toy on a string while the mama cat eats in the background. Photo taken June 25, 2013.
. . .
On April 18, Kitty Cat presented us with five kittens. Two are orange tiger striped with some white, and three are marked like their mother: white with gold decorations.

We suspect the father is a tough old tom we’ve seen around the place at intervals for several years. A retreat writer who spotted him mentioned torn ears and a self-sufficient stalk. We recall that before Kitty Cat disappeared last winter, she had seemed afraid when she was eating in the barn: constantly looking over her shoulder and leaping at the slightest sound. We suspect the other cat was stalking her and the kittens are the result.

A cat’s gestation period is usually 58 to 65 days, meaning the kittens were conceived between February 14 and 21. A retreat guest saw Kitty Cat briefly about the 21st and she showed herself to us March 3. Since then she’s been living primarily in Jerry’s shop, enjoying the comforts of her Cat Loft. A week before her due date, we installed a small carrying crate lined with old towels and she began sleeping there many nights, nesting.

The problem of names is, of course, at the very forefront of our minds. We refused to provide Kitty Cat with a proper name, because we were afraid her wandering ways would take her into the jaws of a coyote and it might be more painful to mourn a named feline than a generic one. Friends, wishing to be helpful, offered numerous possibilities for nomenclature connected either with writing or ranch mythology. We declined.

But now we are in a stew about how to name her offspring. Kitten 1, 2, 3, 4, and 5 would be in keeping with the austerity of their mother’s name, but somehow lacking in the pizzazz we expect them to bring to Jerry’s efforts at wood-working. Kitty Cat enjoys leaping to his shoulder when he’s absorbed in a project, though so far she hasn't done so when he’s operating the table saw. So he is already imagining what it will be like to have five kittens leaping and hissing every time he starts a drill or sander. Or napping on the shelf with the sand paper. Or tippy-toeing across the rack of clamps or scaling the heights of the dust-collection system.

One kitten has been adopted and Jerry is considering keeping one, but the rest are available for adoption, free, now that they are old enough. They are socialized, litter-box trained, and used to small dogs, our Westies Cosmo and Toby.

If you’re interested, email me at info@windbreakhouse.com or leave a message with your telephone number at (605) 255-4064. That telephone is answered only by voice mail.

To see many photos and read about Kitty Cat and the kittens, see my Cat Stories page on this website.