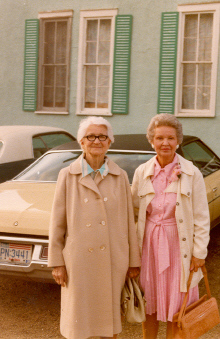 Linda's grandmother, Cora Belle Hey and mother, Mildred Hasselstrom, in Hermosa, 1978.
. . .
I’ve spent this Mother’s Day very pleasantly. I did some laundry, made a huge pot of green chile, read a bit, and wrote a bit. And I planted nasturtium seeds among the radishes and lettuce in the herb garden. I also moved a few plants into my rock garden, decorating it with shells and rocks and other objects I’ve picked up here and there on my walks for years. A dozen bright aqua insulators from the old telephone poles wind like a stream through the sandstone, agate, quartz and other stones.

Seeing the sand dollars and other shells I picked up on beaches in Manzanita, in Maine and in Scotland, a spoon George carved from bone in a bowl Jerry carved from a pine burl, all brought back good memories that flowed through the warm spring air like the songs of the blackbirds and meadowlarks.

Wherever I was during the past few days, I have wished a “Happy Mother’s Day” to every women older than I am that I encountered. Several of them sounded surprised as they said “Thank you!”

Many women, on this day, have been presented with corsages and cards, taken to dinner, saluted with roses or carnations in church or in restaurants, and in various ways remembered and thanked for giving birth. I, too, have been remembering my mother, who died in 2001, my grandmother (the only one I ever met) Cora Belle Hey, and various women who treated me as well and taught me as much as any mother could have. Then, too, I’ve been remembering my four step-children, and the joys of sharing their lives.

And I’ve been thinking about all we women who, for one reason or another, are not mothers. The reasons vary. Some of us chose not to have children for a variety of reasons: because there are too many people on the planet; because we believed we might have important work to do; because we believed we would not be good mothers. Some of us tried and failed. Some of us have lost children at various stages of their lives, from conception to adulthood.

I’m not suggesting that we declare a Step-Mother’s Day, or Bereaved Mother’s Day. Just don’t forget that we’re here too, and we have made contributions to the world in other ways.