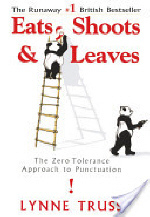 . . .
Eats, Shoots & Leaves by Lynne Truss (2003, Miraculous Panda, Ltd.) is my favorite punctuation manual and I recommend it for all writers. As its author says, “It’s tough being a stickler for punctuation these days.”

The subtitle tells it all: The Zero Tolerance Approach to Punctuation.

The introduction will give you the flavor:

“Either this will ring bells for you, or it won’t. A printed banner has appeared on the concourse of a petrol station near where I live. “Come inside,” it says, “for CD’s, VIDEO’s, DVD’s, and BOOK’s.

If this satanic sprinkling of redundant apostrophes causes no little gasp of horror or quickening of the pulse, you should probably put down this book at once.”

As soon as I began writing this note, I started flipping pages and finding quotable lines on every single one.

“. . . standards of punctuation in general in the UK are indeed approaching the point of illiteracy; self-justified philistines (“Get a life!”) are truly in the driving seat of our culture.”

The advice of Ms. Truss is not for the faint of heart-- but if you want to be a professional writer, you’d better buck up and give up faintheartedness in favor of correctness. Here’s my favorite handout, taken from her pages so as to disguise my own fury by quoting hers:

“The confusion of the possessive “its” (no apostrophe) with the contractive “it’s” (with apostrophe) is an unequivocal signal of illiteracy and sets off a simple Pavlovian “kill” response in the average stickler. The rule is: the word “it’s” (with apostrophe) stands for “it is” or “it has”. If the word does not stand for “it is” or “it has” then what you require is “its”. “This is extremely easy to grasp. Getting your itses mixed up is the greatest solecism in the world of punctuation. No matter that you have a PhD and have read all of Henry James twice. If you still persist in writing, “Good food at it’s best”, you deserve to be struck by lightning, hacked up on the spot and buried in an unmarked grave.”

I couldn't have said it better myself.

back to top
Read More
1 Comments

Oh, I do adore that book. Also love "Lapsing into a Comma." Count me among those who lose it with misplaced apostrophes.