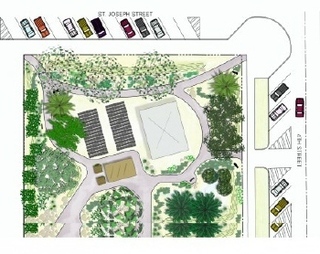 Plans for the Trinity Eco Prayer Park.
. . .
Some retreat writers might recognize Ken Steinken's name from seeing it in the house journal. During the years when I didn't live on the ranch, Ken came often to Homestead House, at least once riding his bicycle twenty-some miles from Rapid City, to write in the retreat solitude. He signed the house journal, saying he'd tried to erase all testosterone from the premises before a women's writing retreat started.

Ken's new project is to help establish an Eco Prayer Park on one fourth of a city block now vacant on the corner of Fourth and Saint Joseph Streets, beside Trinity Lutheran Church in Rapid City.

"Our goal is to create a peaceful, natural place downtown that will preserve open space and enhance the vitality of the downtown experience," Ken says.

The park will contain a circular path leading visitors past four zones representing different biomes: Black Hills, midgrass prairie, shortgrass prairie and wetlands. The park will be practical as well, with swales that will conserve stormwater runoff from surrounding asphalt parking lots, allowing it to seep slowly into the ground instead of entering the city's storm-sewer system. Designed to contain water from a 100-year flood event, the park will have no standing water elements. It will provide examples of native species that local property owners can use in their own water-conserving landscaping.

Here's how Ken Steinken explains the name of the park:

The Name: Trinity Eco Prayer Park
* Trinity -- connects the park to the Trinity Lutheran Church
* Eco Park -- a park that uses and encourages others to use sustainable landscaping
* Prayer Park -- a peaceful place downtown to pray and reflect
* Eco Prayer -- a prayer for the care of the planet; a plea to work with nature instead of against it

I was a little concerned that the word "Eco" might be a little too political; it's a goofy, trendy word but it allows us to avoid "Sustainable" which is clunky; and "Natural" is just too vanilla. The word "Prayer" has been overused and abused, and may unsettle folks on both ends of the political spectrum, so it sets up a creative tension that I like. The official name collects all the elements, but perhaps the park will be best-known simply as Trinity Park, a place to reflect on how we relate to God, one another, and the planet.

The project is planned for completion by 2014, in time for the church's 100th anniversary celebration. Ken hopes most costs will be covered by in-kind donations from church and community members and volunteer labor. "We need every kind of help imaginable," he says.

I'll be donating plugs of buffalo grass and other native grasses as well as any wildflower seeds the project needs and can find on my land.

Website for the Trinity Eco Prayer Park. This is a bare-bones Google Group website that has newsletter-type updates on the park and links for further information.

Read an article about the park in the Rapid City Journal. Includes a photo of the existing bare lot and depictions of what the park will look like.