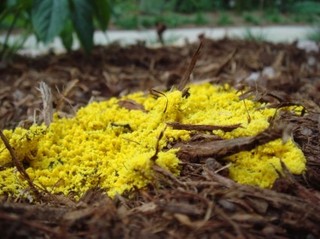 Dog vomit slime mold.
photo from all-free-download.com
. . .
I discovered this critter at the base of one of my potted tomato plants on a warm September day. A few days before, I’d dumped a full pot of spider plants in beside the tomato, as I repotted and rearranged house plants for winter. Now a foamy blob of bright yellow rose beside the tomato. I neglected to take a picture of it, but poked it with a finger. Despite the yellow color, I was sure it wasn't dog vomit, since mine are short dogs, and would have had to stand on their hind legs to vomit into the tall pot. Before I had a chance to look for information, the mold had collapsed into a dry brown mess.

The best source of information I've found is margaretsgarden.wordpress.com (see link below), which shows photos of a slime mold that’s not nearly as vivid as the one I saw, but clearly the same thing. As the writer says, the correct name is Fuligo septica but the common name is considerably more metaphorical and accurate.

Slime molds-- there are more than 700 species-- give no warning. They simply appear, usually in spring or summer in warm, wet locations on decaying plant matter, as a creeping mass called a plasmodium, a huge cell that moves slowly like an amoeba to feed itself on bacteria and fungi. The mold may range in size from 6 inches to two feet in diameter. Once it stops moving, it enters the spore-bearing stage. During one or two days, it hardens and dries to a dull orange. Disturbed, it emits dust: zillions of spares being released to grow in other locations.

While there is apparently no way to keep Dog Vomit Slime Mold out of your garden, it is completely harmless to plants, pets, and humans. Considered edible, it’s cooked and eaten in Mexico-- just like the scrambled eggs it resembles-- in a dish called Caca de Luna. (According to my memory of Spanish, that translates as “excrement of the moon,” which seems less than appetizing.) If you aren't planning to eat it, you can carry it away, or blast it with a hose-- though the latter method just spreads the spores. If you wait a few days, it will vanish by itself.

Leaving its spores behind. (Cue the creepy music.)