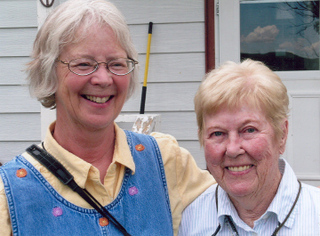 “I sincerely believe that artists are born, and there is nothing they can do about it,” says artist RoseMary Goodson. “They are destined to spend the rest of their lives being different than most people.”

Destined or not, Goodson has been both uncommon and an artist all her life. She began a professional art career in high school, then gave it up for marriage and children. When she started over again in her mid-fifties, she became notable in an entirely different way. At 83, she’s still creating art.

RoseMary Goodson may not be a household name. But thousands of South Dakotans have savored her work–– sketches and paintings of the Black Hills, the Badlands, Mount Rushmore and other South Dakota attractions–– a professional career which began decades earlier with a high school cartoon.

RoseMary was born to Mary and Frederick Joseph Honerkamp in 1917 in a suburb of St. Louis, Mo. When she was four, her mother carried her to the kitchen one Christmas morning, set her on the floor near the wood cook stove, and put in her lap a black stocking filled with toys and candy. “I remember little about what was in the stocking, an orange in the toe, but I remember the black and white of the linoleum I was sitting on,” she says, a design of “diamonds and squares and lines that I could sketch today.”

RoseMary learned to draw at age eight from a carpenter named Ben whom her father had hired to repair the slate roof of their home. One summer noon, she sat beside him as he ate his lunch on the lawn. Ben picked up a slate and took a piece of white chalk from his pocket. He’d always wanted to paint pictures, he said. He sketched the profile of a horse’s head and gave the slate to her.

For months she copied his drawing: on the blackboard at school, on odd scraps of paper; she even made mud sculptures of the horse, re-creating it hundreds of times before she attempted to draw anything else.

By the time she entered Normandy High School, RoseMary was drawing cartoons for Christmas and birthday cards and for the school newspaper, earning money from her art. One Christmas she purchased a small hand stencil. She drew and hand colored dozens of Christmas cards to sell to friends.

Automobiles were just becoming common, along with jokes about women drivers. RoseMary, always alert to her times and able to find humor in any situation, wouldn’t learn to drive for another 40 years, but she created a cartoon about a woman driver named “Nellie.” The young woman solved car troubles while poking sly fun at male views of women. To give her car a sleek, modern look, Nellie made a grille out of slatted window blinds. She jacked up her car and fastened an ice cream maker to a lug bolt to mix ice-cream. Nellie’s auntie used the grille of a visitor’s car as a washboard. Nellie’s “humor, independence, and inventiveness,” RoseMary later wrote, “mirrored the approach I took in my own life.”

After graduation, RoseMary sold the comic strip to the Auto Club News, a newspaper for members of the American Automobile Association. In 1937, The St. Louis Daily Globe-Democrat sent a reporter and a photographer to write a feature about her; she illustrated the story with cartoons. Each month, from 1938 to 1967, she was paid $25 for Nellie’s appearance. In May, 1966, Auto Club News commemorated her 30 years’ entertainment of its readers.

RoseMary’s practical Aunt Rose wanted to send her to secretarial school. Rose Mary “dreaded the thought and convinced her that [she] wanted to be an artist.” Looking for a way to make money, she took a streetcar to the Famous and Barr department store and told the skeptical stationery department manager, Moe Swartz, she’d like to create personalized, hand-tinted greeting cards for people while they waited. By the time she’d arranged her paint, ink, and pens–– she didn’t have an easel–– customers were standing in line. RoseMary perched on a stool and drew on a counter, charging 25 cents a card with a five-cent commission to the store. Soon she had so many customers she had to take orders and finish the cards at home.

Before long a salesman asked her to work for the Stanley Greeting Card Company in Dayton, Ohio. RoseMary left home at 20, on her own in the middle of the Depression with a salary of $35 a week. In Dayton, she roomed with a school teacher for $8 a week, paying 25 cents for breakfast, and 50 cents for other meals. She lacked experience, but creative ideas filled her head. She worked with other artists, devising innovative animated cards with foldout parts–– ducks that wagged their tail feathers and people whose arms opened wide and declared, “I love you this much.”

Soon RoseMary was offered a job as editor. She accepted with some reservations–– the editor she replaced had resigned by jumping out an eighth floor window in New York. “I was probably chosen because I was the only one in the department who could type,” she said modestly.

About 1941, after World War II began, RoseMary began visiting the United Service Organization (USO) club in Dayton, where she was known as that “darn good-lookin’ blonde with the cheerful smile and sparkling blue eyes.” But she didn’t go to dance; she spent evenings drawing and coloring greeting cards for the men. One night, a young corporal asked her to make a card for his sister, Rose, in Brooklyn. As they talked, she learned that Tom was of Italian descent, and had changed his name from Bonfiglio to its English translation: Goodson. Before long, Tom’s letters were arriving daily, and within a few months he returned to Dayton as a major.

“He didn’t verbally ask me to marry him,” recalls RoseMary. “He just tossed the box with the engagement ring in it into my lap.” In 1943 she boarded a train to Brooklyn and married Tom. During the next 13 years, the couple had six daughters and a son: Margaret, nicknamed Peggy; Mary, Grace, Alice, Emily, Tony and Lucy. RoseMary continued to draw “between babies.” Tom, an animation artist who had worked for Walt Disney before his army stint, supported the family.

After 17 years in New York City, the Goodsons decided in 1960 they wanted to raise their children in a better environment. “Tom was getting restless,” RoseMary says, “mumbling about ‘getting out of this rat race.’” Her brother, John Honerkamp, ran The Covered Wagon resort in Piedmont, so the couple moved to South Dakota. But Tom couldn’t find work in the state, so they moved on to St. Louis, where RoseMary’s sister and mother still lived.

One Christmas day, RoseMary took her children to the new “Gateway to the West” arch on the banks of the Mississippi river. Watching a school bus unloading children on a field trip, she wondered if they really understood the arch, and why it had been built. She researched and wrote a children’s book about the structure, illustrating each page with pen and ink or watercolor sketches. As market research, she asked her daughter Lucy’s third-grade teacher to read the draft aloud and show it to her class. Impressed by the kids’ reaction, the teacher urged RoseMary to publish the book.

Next day RoseMary took the bus downtown to the main office of the Jefferson National Memorial Committee, which managed the Gateway monument. She marched past several people waiting for appointments with director Gus Budde, and placed her book mockup on his desk. As soon as RoseMary had completed the illustrations and cover design, he published the book, which sold at the arch for $1.50 a copy. RoseMary got a 20 percent royalty on all sales of The Gateway Arch; by 1972, 50,000 copies had been sold.

During summers, the Goodsons often went to South Dakota to work for RoseMary’s brother John at his resort. Everyone pitched in; Lucy worked on trail rides. RoseMary cleaned the lodge and guest rooms, cooked, and did laundry.

Go to RoseMary Goodson's website to learn more about RoseMary's life and see a gallery of her paintings.

Update 2012: RoseMary (who is going on 95) has a hard time with correspondence now and Emily's project of cataloging RoseMary's original art is falling by the wayside. They used to post a contact address on RoseMary's website but no longer do so because they aren't able to reply to website visitors. Sorry.