The Black Hills Yesterday and Today, by Paul Horsted 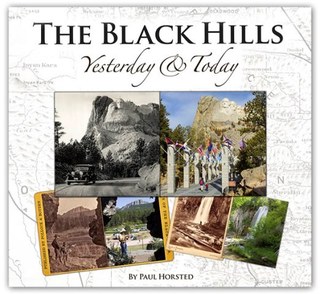 Paul Horsted spent four years of intense work visiting archives, museums and photo collections to glean some of the early images of the Black Hills region, in which he includes the area “within view of the Hills, including towns like Newell, Belle Fourche, Wall and Sundance,” as well as towns that boomed and died, like Cyanide and Crook City. He even included Hermosa, which is often absent from books about the scenery of the Hills.

From the work of about 50 different photographers, he selected images that showed significant scenes in the Hills. The original photographers included Eastman, William Henry Illingworth, Rise Studio, Stanley J. Morrow, and many unknowns. And then, incredibly, he located the spots from which those photographs were taken and provided a modern view of the same scene.

That’s amazing enough, but he didn't stop with the photographs. He included the date of the original photo, if possible, credited the photographer and collection, provided GPS readings for the location (unless it was on private property or in a few other instances). Furthermore, he added field notes, which included descriptions of what he encountered while locating the photograph, or other observations he made.

The photographs are delightful; Horsted hauled his camera to the top of rugged cliffs so we don’t have to climb there in order to see the sights these early photographers observed. In some cases he placed his camera’s tripod in the precise location where a photographer had taken a photo a hundred years before.

I studied each photo and learned so much about the Hills. But my favorite part of the book is the field notes, because of Horsted’s generosity. He says things like, “It is a beautiful place to have a picnic lunch and ponder the changes that have taken place in more than 100 years of Black Hills history.”

Additionally, he notes where changes have taken place since the original image, or since his own photograph. He explains how he balanced on roofs and dangled from rusty ladders to capture a shot. When photographing from streets, he was occasionally threatened by cars, and in Newell, SD, he was nearly run down by a thrashing machine.

He adds travel suggestions like this, “When you go to Deadwood, be sure to stop at the Adams Museum behind the depot. It is a treasure trove of Deadwood history that could easily occupy a few hours.”

A handy index helps the reader quickly locate favorite photos. Many of the images in the book are available as prints.

The Black Hills Yesterday and Today was published in 2006; I never should have waited this long.

To learn about this and other books by Paul Horsted, visit his website at www.dakotaphoto.com