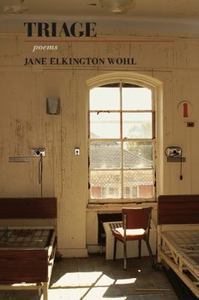 Triage by Jane Elkington Wohl
Published 2012 by Daniel and Daniel Publishers.
Jane Elkington Wohl is an English Instructor at Sheridan (Wyoming) College and Creative Writing Instructor for the Goddard College MFA in Writing Program. Goddard is a low-residency college in Plainfield, VT, specializing in allowing students to create their own bachelor’s and master’s degrees. I’ve always meant to ask Jane how she manages that looooong commute and forgot again.

Jane’s taut poems were included in Leaning into the Wind and Woven on the Wind and I was privileged to comment on her book from High Plains Press, Beasts in Snow.

At the Equality State Book Festival in Casper during September of 2012, I bought Jane’s latest poetry collection, Triage. As its title suggests, this is a dark book; she warned me.

But like the best of dark poetry-- and the darkness of winter, of death, of life-- these verses lead us through darkness and into light. The series of twelve sonnets, “Meditations: Iraq War 2003," provide the most coherent, insightful and ultimately hopeful thoughts I’ve seen on that mess. Moreover, she creates this political commentary in sonnet form, a challenge few poets (including me) are willing to take these days.

“How hard it is to find any god right now,” she remarks; “today it seems our small round world’s gone mad.” She leads the reader through cynicism (the promises of our leaders “sound as dull and cheap as tin”) and despair as she observes young soldiers holding babies orphaned by war. These poems brutally recite the real facts, show us the real pictures of the war our soldiers have been fighting for so long; “it’s hard to find real poetry in this.”

And yet she does find real poetry in the war and all it means to us, whose sons and daughters are fighting as we have ordered them to do. Autumn leads the poet to a “Winter Sestina,” through layers and layers of living.

The second series of sonnets, “News: May 2004,” struck me most forcefully because throughout the dreadful news, she returns again and again to the blooming of pink poppies. In a very small way-- no sonnets!-- I took the same trip in my poem “Reading the Newspaper,” published in Dirt Songs, 2011.

Reading the Newspaper in the Back Yard
by Linda M. Hasselstrom

Blue bells bloom
on the same day
as last year.

Read Jane Wohl’s poetry and be heartened, given strength and courage to face the reality of the sometimes-brutal and foolish world in which we live.