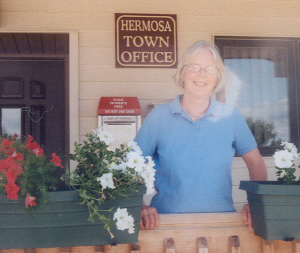 Linda at the Hermosa Town Office, next door to the Library and the Post Office.
. . .
When I complain to Stacy, the Postmaster, that I need a notary public and the town office is closed today, she says, “Oh, the librarian is one, and Tasha, at the real estate office-- and I know she’s working today because she came for her mail.”

So because of the small town habit of keeping track of such things, Stacy saved me a 50-mile trip to Rapid City for a notary.

Later, when I went to the library, Bert the librarian had little boxes of fudge waiting to give as gifts to her library customers that day.

I could say smugly that this is one of the benefits of living in a small town but these incidents illustrate more than that. Both these women do their jobs extremely well but they also pay particular attention to the people with whom they interact. They respond firmly, gently and politely to people so furious they are literally spitting. They listen to laments, complaints, bad jokes and whining and they do it with a smile.

Sure, this is a small town and these two are uniquely placed to know a great deal about many of us who live in the area. But the way they do their jobs, the way they handle what they learn about us, could be done anywhere. They pay attention in a world where too many folks see nothing but what’s directly in front of them. They smile when they probably don’t feel anymore like it than the grumblers on the other side of the desk. Because of their patience, they send many of these grumblers into their day smiling and happier than when they entered the Post Office or the Library.

We can all do that. Try smiling at the next grump you meet; you might be surprised what you learn. 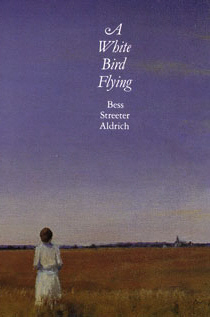 Cover of "A White Bird Flying"
. . .
My mother grew up on her family ranch with an interest in books that lasted her whole life; she read to me, quoted writers to me, and turned me into a reader-- though she’d rather not have turned me into a writer.

Once we moved to the ranch, both my parents encouraged my reading habits; I was always allowed to open one gift before they got up on Christmas morning and it was always a book and I always read quietly until they arose. Sometimes, though, if I was reading in the middle of the day they encouraged me to stop reading and go hoe the garden.

Mother preferred romantic poets-- she’d kept poetry books from her college days, some inscribed as gifts from suitors, and quoted the Brownings often. She loved the books of Bess Streeter Aldrich. No doubt I considered my tastes superior to my mother’s because I never read Aldrich. But recently my faithful correspondents (Hobie and Lois Morris), modern homesteaders in upstate New York, mentioned how much they enjoy her work. They also compared my writing to hers, praising us both for bringing the prairie to life.

So I decided it was time. Yesterday I finished A White Bird Flying, originally published in 1931 and kept in print by the University of Nebraska Press. The story of Laura, the writer, bears some close resemblances to Aldrich’s own biography and to mine as well.

I could identify with Laura when she pictured herself as a writer, standing outside her own emotions sometimes until she almost missed the important part of human interactions. Laura was a hick when she went to college, just as I was, and stumbled over some of the same problems with sororities, studying, and her friendships with both men and women. Somehow, she grew to believe that she could not be a writer in Nebraska, just as I at one time concluded that great writers had to live in New York, if not California. I suspect that Bess Streeter Aldrich may have thought similarly, but she spent her life in small towns and wrote nine novels and numerous other works about the life she lived.

Since I encourage you to read this book, and others by Aldrich, I won’t tell you how Laura solved her dilemma. Aldrich’s descriptions of life in a small town in Nebraska are filled with details that made me laugh and cry over their resemblance to the places I’ve known and loved.

And writers, especially those from small towns in the Great Plains, if you read nothing else of hers, please go to Aldrich's website and read “Why I Live in a Small Town,” published in Ladies Home Journal in 1933.