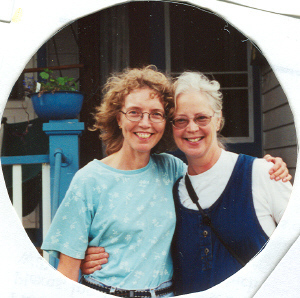 Twyla and Linda, 2000.
During a visit at Linda's house in Cheyenne, Wyoming. 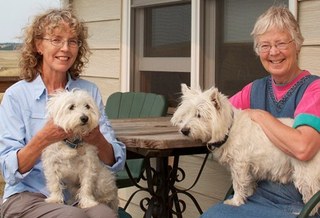 Twyla and Linda, 2012.
Twyla Hansen (with Toby) and Linda Hasselstrom (with Cosmo) Summer 2012 at Windbreak House. Twyla swears she was giving Toby a neck massage, not choking him.

Dirt Songs: A Plains Duet All About the Book 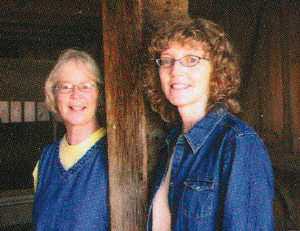 Linda and Twyla, 2011.
This is the author photo on the back cover of the book, taken in Linda's barn at her SD ranch.

About the Authors --- Linda

About the Authors --- Twyla

The two poets reflect the prairie’s influence in these masterful poems, celebrating sky and water and soil, and their love of all things green and blooming, feathered and furred, farm and ranch, wild and domesticated, warm and breathing.


What Twyla says About the Book:
Linda and I are greatly influenced by our upbringing and on-going involvement in the rural areas of eastern Nebraska and western South Dakota. We have known and admired each other’s writing for a number of years, and recently came up with the idea of putting together a duo collection loosely based on the theme of farm and ranch, resulting in this two-part collection.

Click here for a webpage about Linda's awards and honors.


For Book Orders and More Information About the Book: 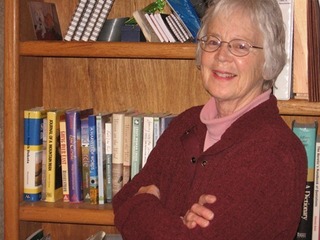 Her published books include: No Place Like Home, Between Grass and Sky, Feels Like Far, Bison: Monarch of the Plains, A Roadside History of South Dakota, Going Over East and Windbreak, all nonfiction; Land Circle, essays and poems; Bitter Creek Junction, Dakota Bones, When a Poet Dies, Roadkill, Caught By One Wing, poems. Her work appears in these collections, among others: Heart Shots: Women Write About Hunting; A Road of Her Own: Women’s Journeys in the West; Mother Earth: Through the Eyes of Women Photographers and Writers; Ranching West of the 100th Meridian, Island Press; Living in the Runaway West. Information about her writing appears in: American Nature Writers, editor John Elder; Dictionary of Midwestern Literature, ed. Philip A. Greasley; and Such News of the Land: U.S. Women Nature Writers, ed. Thomas S. Edwards and Elizabeth A. De Wolfe.

Hasselstrom has conducted workshops and readings on writing and land use throughout the Great Plains for audiences from kindergarten to nursing homes. She has been the resident writer for her Windbreak House Writing Retreats since 1966, was an online mentor for the University of Minnesota/Split Rock, 2003-2010, and a visiting faculty for the Iowa State University MFA in Creative Writing and the Environment 2008-2011. Her recent awards include Zonta’s Best Woman Writer award, Billings, MT, and the WILLA award for best nonfiction, Women Writing the West, both awards for her nonfiction book No Place Like Home, and both in 2010. 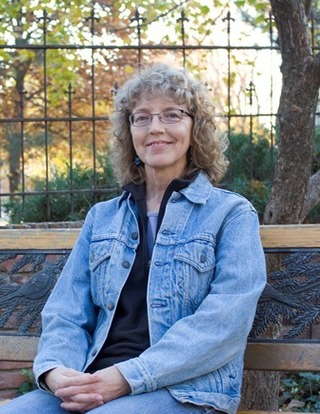 
Twyla M. Hansen received her BS in Horticulture and MAg in Agrocology from the University of Nebraska-Lincoln. She grew up on land in northeast Nebraska her grandparents farmed as immigrants from Denmark in the late 1800s. Her books of poetry include: Prairie Suite: A Celebration (co-authored with Paul Johnsgard) 2006 Spring Creek Prairie Audubon Center; Potato Soup 2003 The Backwaters Press (winner of the 2004 Nebraska Center for the Book poetry award); Sanctuary Near Salt Creek 2001 Lone Willow Press (a limited edition chapbook); In Our Very Bones 1997 A Slow Tempo Press; and How to Live in the Heartland 1992 Flatwater Editions.

Twyla has been a creative writing presenter through the Nebraska Humanities since 1993, and has conducted workshops, residencies and readings to a wide variety of audiences in ten states. Her poems were nominated for the Pushcart Prize in 2001 and 2005, read by Garrison Keillor on The Writer’s Almanac, made into art books, set to music for female voices, featured in Poetry Desk Calendar 2000, and film-illustrated by Nebraska Public Television.

She lives in Lincoln, Nebraska where she maintains her wild, wooded acre as an urban wildlife habitat.


Linda wrote:
Dirt Songs: A Plains Duet has been a delightful experience, an easy collaboration. Twyla first suggested that we do a book together several years ago; and as soon as she mentioned it, the idea seemed exactly right to me.

We’ve known each other for years, as poets in neighboring states know each other, and we’ve admired each other’s work. We’d read sometimes at the same conferences, so possibly we met when I visited Nebraska Wesleyan University where Bill Kloefkorn taught and Twyla was horticulturist. We both loved Bill Kloefkorn’s poetry and his company-- the book is dedicated to his memory.

We have so many interests in common: poetry, plants, the prairie, and natural landscapes; she and her husband visited us several times in Cheyenne where I planted many species of native plants. She once wrote in delight to tell me that she had received a citation from the city for an “unsightly yard” on the same day she received an award for preserving native prairie in her yard. So we share a deep love of the land in its natural form, though she was raised on a farm and I was raised on a ranch.

She and her husband Tom, the photographer who provided the cover and author photos, visited a couple of years ago after we’d agreed to do a book together. Somewhere along the line we decided on submitting fifty poems each. Neither of us commented much on the other’s work; we edited our own pieces and sent them to one another, mulled them over and finally made our final suggestions.

Twyla did most of the work of putting the manuscript into proper form, of submitting it to various publishers around the country and of corresponding with several publishers who turned us down, as well as The Backwaters Press, which accepted the book. We collaborated most closely on the title, lobbing possibilities back and forth until settling, with laughter, on Dirt Songs: A Plains Duet.

Though we sent each other our poems and commented a bit back and forth, we didn’t heavily influence individual pieces. The correlations that arise in the book are entirely natural; Twyla has done more readings from Dirt Songs than I have, and she’s come up with several poems that fit naturally together: