Giving Away the Saddles 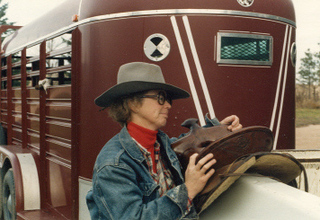 This is the saddle made by Charley Streeter of Buffalo Gap, South Dakota.
It was made for me when I was 12 years old. This photo was taken in the late 1980s.
. . .
Note: This blog was originally posted on January 12, 2013.
It is re-posted now with the addition of the thank-you letters at the end.


Recently I gave away my saddles: my father’s old Duhamel saddle, the saddle made for me when I was twelve by a saddlemaker in Buffalo Gap, and George’s, also an antique. They went to a family in the neighborhood, with two sons and a couple of nieces who may eventually grow into one or more of the saddles. The two boys have been wanting saddles of their own but the cost simply wasn’t possible. And the nieces, coincidentally, are descendants of a man who used to repair all our riding boots in his saddle shop.

When I showed the high school boy my father’s old-fashioned saddle, his eyes opened wide and he smiled so hard he must have strained a muscle. Suddenly I could see my father on his Tennessee Walking horse Zarro. And I seemed to see him smile at this long-legged kid, as tall at 17 as my father was as an adult.

Then the younger boy took my saddle in his arms-- the weight nearly felled him-- and with a determined frown hoisted it over his shoulder to carry it outside. He put it down on the ground while his mother opened their car-- but he put it down with the sheepskin lining against the ground. Quietly, the older boy corrected him: when you put a saddle down, you tip it over, so the horn rests on the ground, to keep from breaking or straining the tree inside and to keep the sheepskin lining clean.

After they left, I cried, thinking over long memories of riding with my father and George, but I smiled too, to know those saddles will be ridden and cared for by another family for more generations than I will live.

Later I realized that giving my saddles away is an admission that I am unlikely to ride a horse again. Of course I didn’t ride all the time we lived in Cheyenne but I always had my saddle oiled and ready.

I'd suffer plenty of muscle pain if I rode again but the worst part would be that I’d be riding a horse I didn’t train. Many of the times I’ve done that, I’ve regretted it: no one trained horses the way I learned to do from my gentle father. Horses are intelligent and sensitive and too many of the ones I’ve ridden that were owned by someone else had been treated so that they were untrustworthy. I’ve been kicked in the upper arm, thrown, rolled on.

No, I’m not likely to ride a horse someone else has trained and that means I’ve given up something that was of deep importance to me. The freedom of riding a horse here on the ranch has been unparalleled in my life; the sheer joy of moving in such harmony with a horse’s muscles and mind is like nothing else I’ve ever experienced.

I have made this choice many times in the past few years and giving away the saddles was making it again, more permanently. I’m nearly seventy years old but I’m not in bad shape. I could buy a young horse, train it, spend time riding. Or I could buy an older, well-trained horse and enjoy rides all over the pastures I still own. But I have responsibilities to my partner, to my dogs, to my garden and most of all to my writing. The time I devoted to riding would need to be taken from something else and I choose not to shortchange those other elements of my life. Most importantly, I’ve chosen to sit in this office chair and write about the life I lived, hoping to help inspire protection of the prairies and the ranching life so that other youngsters may know the life of freedom I knew on horseback.

When the family asked if they couldn’t pay something for the saddles, the teacher in me arose. In return for the gift, I asked only that the two boys write me their thanks. I reasoned that besides providing them with good practice in writing in general and in expressing gratitude in particular, the exercise would serve as an illustration that generosity is an important part of enjoying a satisfying life.

To prove my confidence was not misplaced, here are the letters I received.

From the high school student:

Linda, I want you to know how awesome it is to have a usable piece of history. Every time I use the saddle, I think about your Dad and the kind of hardworking but interesting person he must have been. Thank you for sharing your history with me!

From the grade school student:

Linda, I like character. The saddle I ride has that. Plus it has a neat story. A South Dakota author grew up having adventures in my saddle. Pretty neat.

From their mother and father:

Linda, Your husband's saddle has been used by __________ (two nieces who are neighbors). We do cherish the fact that you saw our children and extended family as keepers of your story in any form. We also love that you see them as responsible and caring enough to preserve some very fun saddles that would have stories to tell if they could talk.

back to top
Read More
3 Comments

This beautiful piece of writing shows readers how to make thoughtful but difficult choices. The teacher and parent in me applauds the idea of asking for written thanks!

Two years ago, my then 86 year old friend gave me his saddle. I could well afford my own, in fact, had two on the rack. I had just stopped by for a visit, and he asked me to come out to the tack shed. He pulled the saddle down, handed it to me, and told me to take it home and try it out. When I asked him what he needed in return, he said he couldn't think of a better person to own his saddle, as I would likely ride it in the mountains where he had ridden all his life. "Besides," he said, "I'll know where it is if I need to borrow it." Taking it home, and trying it out, I found it fit better than any I had ever ridden. He knew that, I believe. Not only does the saddle ride the trails that he once knew, but I showed it new country in the badlands of S.D. My other two saddles sit neglected in the barn. Maybe I'll find a couple of kids who can show them some new trails.

Hi Leslie,
You have reconfirmed my decision that this was the right thing to do. Thank you, and may your saddles find good homes.