Book Review: I Do Not Apologize for the Length of This Letter 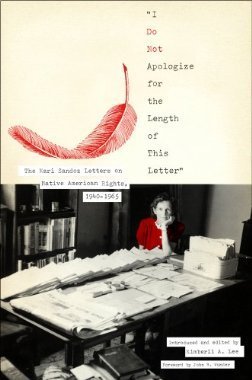 . . .
I Do Not Apologize for the Length of This Letter: The Mari Sandoz Letters on Native American Rights, 1940-1965.
Introduced and edited by Kimberli A. Lee


Mari Sandoz, who wrote extensively about the lives of both whites and Indians on the Plains, grew up during pioneer days in the Sandhills of Nebraska with parents who did not consider writing to be real work. Her father, who as Old Jules was the subject of one of her best-known books, called writers and artists “the maggots of society.”

I wonder if Mari ever thought about that metaphor. Maggots, as that famous plainsman Hugh Glass learned in the work of Fred Manfred, can be healers. After a grizzly bear slashed the old trapper’s back, it was the maggots who scoured away the dead flesh and allowed the injured mountain man to live.

And Mari Sandoz dedicated her writing to the life of the plainsmen and plainswomen she knew as a child in the west. Her best-known books, besides the memoir about her father Jules Sandoz, were Crazy Horse and Cheyenne Autumn, about the Indians she knew as a child and as an historian of the Northern Plains.

Sandoz was obsessive about accuracy, a trait which served her well as a writer. But in addition, her demand for truth in the way people write about her Indian neighbors led her to spend considerable time ferociously fighting battles on their behalf with other historians, with legislators, with government officials, and the public. She considered writing about Indians (the term they prefer to Native Americans) to be a privilege and an honor, not an entitlement.

This book may demonstrate why Sandoz’s work did not get as much attention as her subject matter deserved. She remains one of the most unique writers in American literature and one of the least known and appreciated. Writers must, above all, write. As soon as she finished one book, she was behind schedule on another, working hard all her life to finish a cycle of books aimed at showing Plains residents, both white and Indian, to the rest of the world. A selection of her titles shows her massive scope: The Beaver Men: Spearheads of Empire; The Buffalo Hunters: The Story of the Hide Men; The Cattlemen: From the Rio Grande to the Far Marias; These Were the Sioux; and the posthumous The Battle of the Little Bighorn, banned from the federal monument for years because of the truths it told.

Sandoz’s writing schedule was extremely productive. She considered herself an historian; while she could write lyrically, she never had the leisure to polish her prose to a high gloss. She explained once that she could write either books or letters, but not both. And yet she wrote hundreds of letters (typing them, remember, one by one on a non-electric typewriter, not printing them swiftly on a computer or emailing them) clarifying history, attempting to correct negative stereotypes, and criticizing federal Indian policy. She was ferocious in her knowledge and defense of Indian ways and in attacking the worst destructiveness of her period: the termination program and the relocation program.

During much of her writing life, many white leaders, including Westerners, were working to persuade the federal government to terminate its treaty obligations to tribes, many of whom were then swindled out of their land with its rich natural resources. The relocation program promised Indians new and productive lives in cities but mostly tossed them into poverty without education or preparation. The book’s title, in fact, comes from a phrase she used first in a letter to President Truman and later to the heads of subcommittees on Indian affairs in both houses of Congress.

Besides all this, she wrote to Indian leaders and students, encouraging them in efforts to obtain help during a particularly difficult period in their history. Many of her letters, to readers, to other historians and writers, to critics, contain mini-history lessons several pages long, complete with references to research materials she’d dug out of musty government files.

She also took time to appear on television and radio, always consulting with tribal authorities before being interviewed about Indian culture. She resisted degrading stereotypes everywhere she saw them, noting that they not only demeaned the Indians in the eyes of whites but harmed the self-respect of the Indians themselves. She was, she insisted, giving her efforts back to the Indians in gratitude for the knowledge they had given her. “I owe a great personal debt, philosophically, to the Plains Indians,” she said. (P. 163) She kept the faith; some of the research materials entrusted to her by the old chiefs were destroyed upon her death, to preserve ancient secrets.

And always she made clear that she was speaking only with the respect and assent of the Indian people she consulted. In many instances, she became the only voice on their behalf that could be heard-- because the era’s whites believed the ugly stereotypes they had created.

Born in 1896, Sandoz worked her way through the University of Nebraska-Lincoln and traveled throughout the West for research on her books, though she lived much of her life in New York. She was an important voice for Indians in the civil rights era of the 1960s and worked hard to help Indian writers and artists develop their own voices.

Her voice is still relevant; we are still not free of the stereotypes evident in Chapter Three which surfaced so clearly in the horrid Hollywood movie about Crazy Horse. Efforts to exploit Indians and their remaining resources are still frequent. They still need, as Sandoz said in 1959, “land, education, credit and hope.” (P. 66.) And the exploiters are still making money from ruination in White Clay, NE. (p. 72.)

I was a little frustrated that the book could not provide both sides of the correspondence, for example President Truman’s response to Sandoz. However, usually the letters are self-explanatory and the editor provides a helpful overview at the beginning of each chapter. Editor Lee astutely forced me to admit that Sandoz does a little stereotyping of her own, romanticizing a bit in her attempt to demonstrate the rightful place of Plains Indians in American society and their importance to modern Plains history and culture.

Through her books as well as her letters as shown in this volume and others, Sandoz is still working to heal the damage done to Plains residents, white and Indian alike, by greed, exploitation, poverty, alcohol, evils of civilization. Maggot of society, indeed.