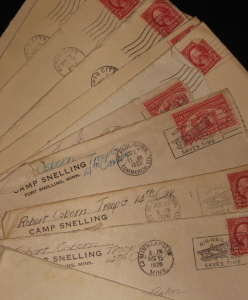 Does anyone save old family emails?
. . .
Many of the writers I know are quite proud of it.

Elsewhere, I’ve already confessed to how I changed my mind about computers when I realized how efficient they were for preparing manuscripts.

And I’ll even admit that when pressed for time-- let me rephrase that-- when PARTICULARLY pressed for time-- I may do a little recycling with a letter. I’ll write a letter saying what I’ve been doing lately and then change the "Dear____" part to fit the recipient. After I print it out, I add the personal notes at the bottom before mailing-- and I usually say, “Excuse the generic letter.”

But I stubbornly continue to write personal letters to many friends. Not only that-- but I hand-write some of them, proving that I am stuck in antediluvial times, sinking in the swamp of prehistory.

Here are some of my reasons.

I have only a few of my father’s letters, usually headed with the date and “At the breakfast table.” My parents lived in what is now my writing retreat house, which doesn’t much resemble the way it looked when they were there. The round oak table at which my father wrote is gone; the curtains he pulled aside to look out the window have been replaced by modern shades. The buffet on which he kept a dictionary so he could look up any word about which he was uncertain is in someone else’s home.

But when I see my father’s handwriting on those letters, I can picture him just as he was on those mornings, the blue eyes, the smile he never wore for photographs because he hated them. My mother is cooking breakfast in her blue bathrobe. He has been out and looked at the weather, recording the night’s low in his journal. He’s planning his day. And he’s writing words of advice and love and encouragement to his daughter.

These letters are particularly precious considering how his life ended, in anger and bitterness and confusion. Without seeing that strong handwriting, I might gradually let the good memories be submerged in the horrible ones. The handwriting provides an anchor; a typed copy of the letter would not be the same. Had he been emailing his thoughts, they’d have long since vanished.

Perhaps nothing I write to any of my friends is as important as those notes my father wrote and it may be that none of my friends keep my handwritten notes. That doesn’t matter either. I like the feeling of holding that pen and seeing the words flow onto the paper, even the recycled scraps I sometimes use for notes, tucking them into envelopes with a few clippings of news stories I can imagine discussing with my friends.

I like seeing in my mind’s eye my friends taking those envelopes out of the mailbox, slitting them open, sitting in their favorite chairs. My handwriting conveys my voice, my thoughts, my image in a way no computerized facsimile ever could.

And when I am hand-writing a letter, my mind slows down. I take time to form the letters, picturing the person to whom I am writing.

Fairly often, I discover as I scribble a thought that had been eluding me while I sat at the computer and pecked and stabbed and jabbed and dug and prodded the keys, a thought that could not be born as the cursor blinked.

So whether the post office is efficient or not and no matter how much it charges me for the privilege, as long as mail service exists, I’ll keep folding those letters, hand-addressing the envelopes and hauling them to town, thinking of the people whose handwriting will be on the envelopes I’ll get back in a few days.

I've been keeping this link, thinking the only appropriate way to really respond would be to write you a hand-written letter. But I never seem to find the time (sigh).

My 89-year-old mother writes me every week and has been for years. I save every single one.

Linda, Thank you so much for this! I am a letter writer. It is so interesting to see how people respond to getting a hand-written letter ....they love it! Sometimes, they write me back. Just the other day, I opened an old suitcase and found a large manilla envelope full of letters. Handwritten ion the outside was a note from my now deceased Mother: letters from Carol, first year at college. I have not had the nerve to,read them yet, but, it touched my heart that my Mother had kept them. My first year if college was fifty years ago!I write to my 5 great-nieces letters monthly and sometimes they write me back. That is a thrill. Thank you so much for your work. Continued good luckl