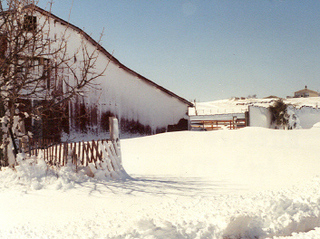 Linda's ranch after an un-named storm in 1999. Storm Orko in 2013 gave us only some wind and a dust of snow.
. . .
We hear that Storm Orko is headed our way even as Nemo is pounding the east coast.

And Nemo means “no name, nobody.”

How unpoetic. Why doesn’t the weather service hire poets to name storms?

Instead of Nemo we might have Nathaniel, Nate for short; Noel, Narcissus, Nero, Nestor, Newell, Nicholas.

Instead of Orko we might have Ocean, Odelle, Oleander, or Oprah. Surely we could do better than Orko.

I suppose some self-centered sort would get into the position and abuse it-- name storms after him- or herself or use the naming as a way to poke fun at political figures.

Which could lead to some major metaphor-making: Storm Michelle Banged into the East Coast on Monday. Storm Kim had a wardrobe malfunction and dropped three inches of rain on . . . Or Storm Hillary is Raising He--

Well, maybe this is why the weather service hasn’t tapped poets for this job.

P.S. I’ve just learned from a friend that the National Weather Service is not naming the storms-- the Weather Channel is, in an attempt to make people pay closer attention. I suppose I could apply for the job.

Or I could say, in the words of Gilda Radnor, one of the finest comediennes ever, "Never Mind!"